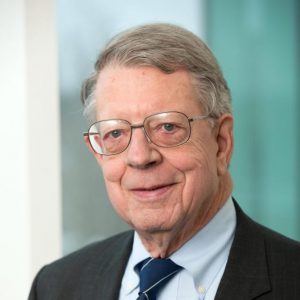 The E. M. Morris Award is given to an individual for distinguished achievement, leadership, and contributions to the advancement of business and quality of life in Michiana.

Schurz is past chairman of Schurz Communications, Inc. a news and information company that consists of cable, newspaper publishing and digital media businesses, including the South Bend Tribune, where he served as editor and publisher for many years. He is past president of several state and national newspaper organizations and served as director of a number of broadcast and cable organizations, including C-SPAN. Schurz is a graduate of Harvard College and Harvard Business School. He served as an Army artillery officer during the Korean War. He now lives in Montana and continues to be involved in philanthropy and education.

Schurz established the Opportunity Scholarship in 2003 and since then nearly 200 recipients have been able to pursue their educations and careers with a degree from IU South Bend. The endowment, which will exist in perpetuity, provides multiple annual scholarships to students from minority backgrounds.

The E.M. Morris Award was presented to Schurz by Richard Kolbe, dean of the Leighton School at IU South Bend. His father, Franklin, Schurz Sr., received the same award in 1981.