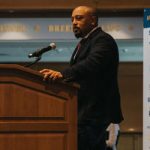 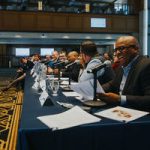 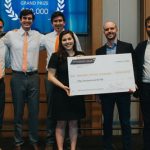 Altogether, $266,000 was awarded as cash and $143,000 was given as in-kind prizes such as banking, tax, legal and intellectual property support.

Teams presented before a panel of nationally-known judges and 600 attendees in the Dahnke Ballroom at the University of Notre Dame stadium. Daymond John, CEO of FUBU and co-star of ABC TV’s Emmy-Award winning series, “Shark Tank”; Matt Rogers, the inventor of the Nest thermostat and engineer on the original Apple iPhone; Swati Mylavarapu, founder of Incite Labs, partner at Incite Ventures and former partner at Kleiner Perkins Caufield and Byers; Dan Peate, alumnus, founder and general partner of Peate Ventures; Mark Foley, alumnus and managing director at RWI Ventures; and Tracy Graham, alumnus and founder and managing principal of Graham Allen Partners served as this year’s final round judges.

This was also the first year where teams from the community could compete for prizes, with more than $100,000 being available to them.

“Words simply cannot describe how pleased we are with the 2018 McCloskey New Venture Competition,” said Karen Slaggert, director of the McCloskey competition and director of student entrepreneurship at the IDEA Center. “We had incredible support from the Notre Dame community and our award sponsors. Feedback from those attending has also been incredibly positive. The energy and excitement in the room was palpable as our student, alumni and community ventures knocked the ball out of the park!”