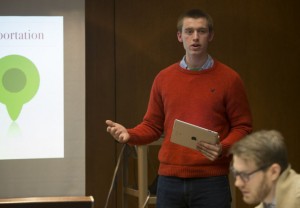 SOUTH BEND — An app that allows city buses and public school buses to be tracked and tagged by riders in real time won the top prize Monday in the Notre Dame-Schurz Prize competition for innovation.

Fitzgerald said he got the idea while using Transpo buses to get around South Bend and Mishawaka, and finding out the buses don’t always adhere to Transpo’s published route schedule.

He said the app might be even more useful to parents who want to track the travel of public school buses their children ride, so the children aren’t stuck outside in bad weather for long periods of time awaiting their school bus.

He said his app does not require that an expensive GPS device be added to every bus. “My app gets rid of the need for that,” Fitzgerald said.

His app was among 10 student projects presented during Monday’s competition at the University of Notre Dame’s College of Engineering.

The competition is sponsored by Schurz Communications Inc., parent company of the South Bend Tribune and the WSBT TV and radio stations. The goal is to encourage students to develop digital solutions and innovations for media companies.

Placing second in the competition and earning a $1,000 cash prize was junior Jonathan Cobian’s Around the BeND app. The app is designed to provide Notre Dame students a one-stop location for finding fun and inexpensive things to do in the South Bend area. It includes details about area restaurants and bars, food and drink deals, and sports and entertainment events.

Placing third, with a $500 cash prize, was HelpHub, an app developed by juniors Nikita Amelchenko and George Georgaklis. The app is designed to provide a “marketplace” for matchmaking between campus residents who have tasks that need to be performed and others who are capable of performing them. For example, if one student needed groceries, and another student had a car and the time to go to the grocery store, the two could be “matched.” The student seeking help and the student offering help would negotiate the payment.

The students developed the apps during a course taught by electrical engineering professor Patrick Flynn.