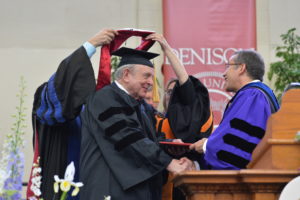 the keynote at the ceremony.
Schurz has been a leading voice in Indiana as a president and publisher of the Bloomington Herald-Times and vice president and director of Schurz Communications, a media firm operating radio, television, cable, and newspapers in ten states. A member of the International Press Institute and the World Press Freedom Committee, he served as president of the International Newspaper Marketing Association in 1986, and held the office of treasurer from 1997 to 2004. In 2009, he was the recipient of the Ralph D. Casey award given by the Department of Journalism and Mass Communication at the University of Minnesota. Schurz has been a member of the board of the Hoosier State Press Association and served as president in 1989 and 1997, and was awarded the HSPA Distinguished Service Award in 1998 and the First Freedom Award in 2002. In 2003, he was inducted into the Indiana Journalism Hall of Fame, and in 2005 received the Indiana Journalism Award presented by Ball State University.

Denison University’s place at the forefront of higher education is recognized by “Colleges That Change Lives,” U.S. News, and Forbes, among others. Denison is a leading national college of liberal arts and sciences where students from around the world come to pursue academic inquiry and research, to analyze and solve problems, and to forge the skills needed to succeed. On a beautiful, fully residential campus, located minutes from Forbes-rated #1 Opportunity City, Columbus, Ohio, students build enduring relationships and pathways to the professions, supported by faculty mentorship in classrooms, laboratories and studios; through a wealth of career-launch programs and internships; and in partnership with a thriving, far-reaching alumni network.
###
University Communications
Ginny Sharkey: 740-587-6266
Online: news@denison.edu, www.denison.edu